Last week Marijke had her birthday, and to celebrate it,
Mr Mitsuda and his family took us out for Dinner.
Yes, Dinner with a capital D.
Location?
Okura Hotel in Hakata.
First, with all of us, very comfy and cosy
in the lounge: Some Bubblies. 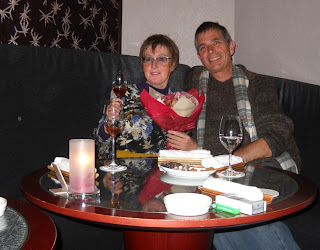 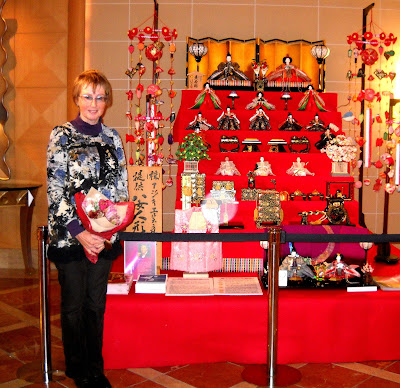 On the way upstairs to the restaurant, we passed this
O Hima Matsuri display (dolls display for girls day= March 3rd)).
Aint Marijke one of them? 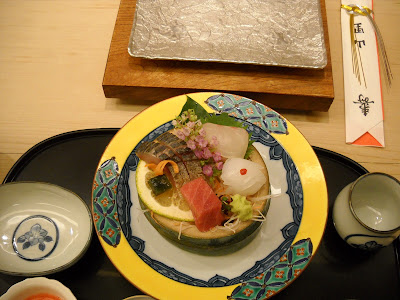 On the menu was Tempura, but as a starter we had some superdooper sashime.
And you know we luff raw fish. 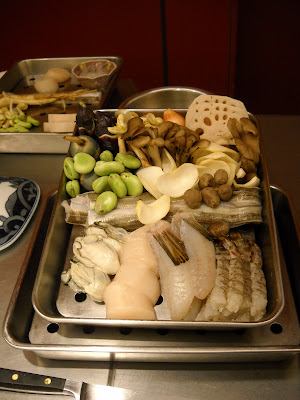 The bits and pieces for the tempura are ready...
Shrimp, mushrooms, fugu, scallop, oysters, eel,
green beans, tree potato, onion, lotus root, egg plant...
Just to mention a few!
And all so perfectly done. Yummy.
Good tempura all depends on the Right oil, Right temperature and of course the Right ingredients in the right order.
And, to know when to say: That's enough. 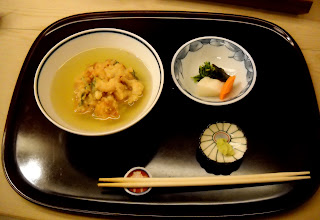 The last dish was some tempura & rice
with warm green tea poured on top of it.
We made it home that night...
Well fed and with very happy tommies.
Thank you Shacho san.
at 12:14 AM No comments:
Email ThisBlogThis!Share to TwitterShare to FacebookShare to Pinterest
Labels: jan 2012

The Ibusuki Marathon was still feel-able in the leg muscles...
but we (Noriko and jaap) accepted with pleasure the invitation to join some
Trail Running.  The Bonus would be a frozen waterfall near the top of mount Homan (near Fukuoka), afterwards a good soak in a hot spring
and a New Year's Party.
Oops, they said Trail Running?
That's different from a jog on tar seal.
Trail Runners like to Do It Up and Down.... 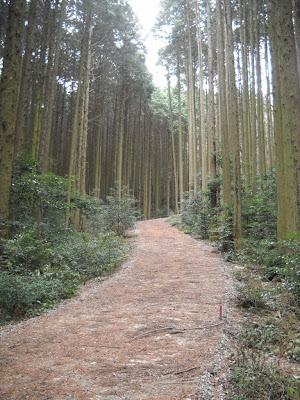 So far looking good...
Is it going to be like this all the way??
Nope. 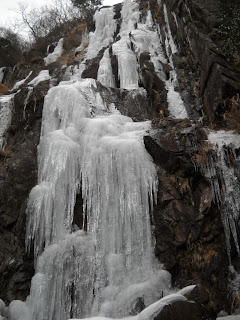 Any way, it was more or less a steep go-go-hike-climb
to the frozen Waterfall. 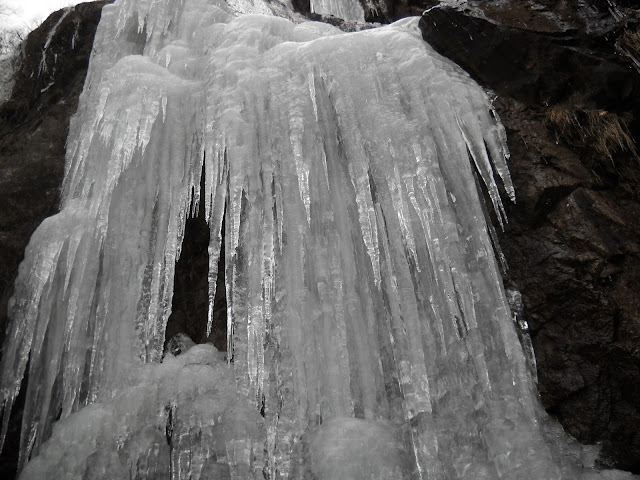 Close up. Pretty and cold. 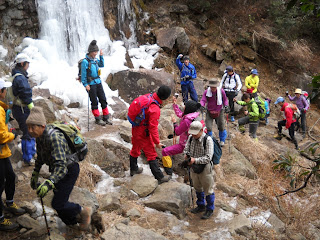 As you can see, we were not the only ones.
It is interesting to watch all the colorful outfits.
Ha, and the difference between Hikers and Runners..
Oh yes, Trail Runners go the same track as Hikers, but they like to do it with less junk on their back ;-)
From the waterfall on, it was serious running, mostly along the mountain ridge...with snow left and right.
Sorry, no pictures as the Going was Fast. 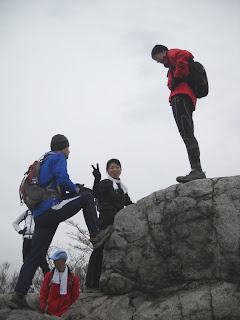 At the top most top of Mt Homan...hmmm, a scene from Lion King?
Here is Noriko consulting Mr Kohtake and Mr Sato.
Both are veteran Ultra Marathon Runners, e.g. they did
the Mont Blanc Ultra Marathon (166K) and
the Mt Kinabalu Half Marathon.
(that 4200 meter mountain i climbed in 2009 while Alishan was in Borneo) 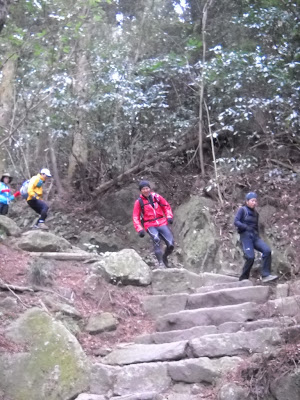 Going down was Fast and Fun, even at these stone steps.
Mr Kohtake showing his skills (red jacket). 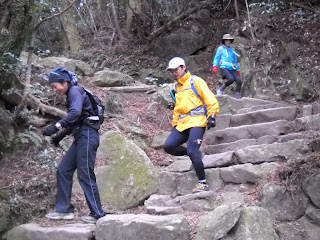 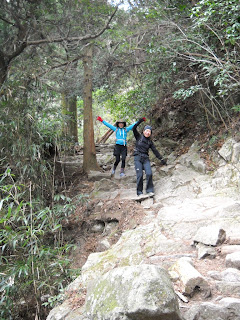 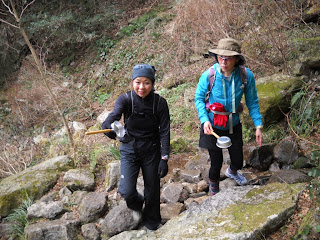 Trail Running is not only go-go-going,
Here Noriko and Mari are enjoying a sip of  Mt Homan's tasteful water.
We made it all the way to the bottom...just to discover that
Mr Kohtake had taken us to a "wrong exit"...
So Up we went again;-) 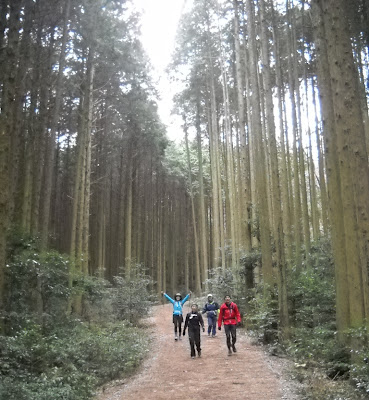 Three and a half hours later....
Indeed, it was good fun.
And oh yes, the bath was nice but the party even better.
But Boy...it was a calorie gainer...
Salute
at 4:39 PM No comments:
Email ThisBlogThis!Share to TwitterShare to FacebookShare to Pinterest
Labels: jan 2012

Winter Spin with Esther the Car 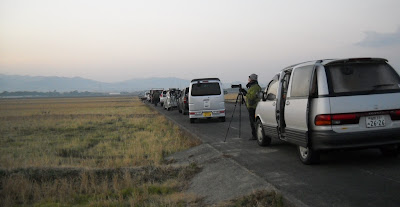 Are you ready......
10.000  Tsuru's!!!
Click on the picture.
Short tuby, taken on January 7, just before sunrise.
Tsuru's from all over the place are flying in to share their breakfast in this field.
This year there is no bird-flu in the air, so we can come really close to the feeding grounds.
What an amazing sight!
See also Marijke's pictures at:
http://wingsndthings.blogspot.com/ 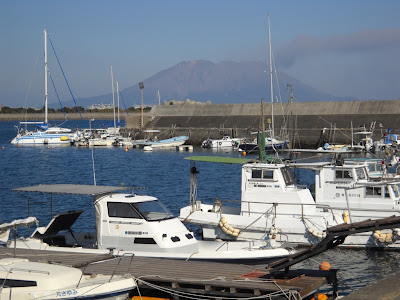 Later that day we drove further down south but we had-to-stop to take this picture:
Mount Sakura on the other side of Kagoshima Bay is steaming and fuming.
Oh yes, this is the land of volcano's and hot springs.
Beside the tsurus and the hot springs there was an other reason why we were spinning around with Esther.
Yep, Yap had done it again: he had signed-up for
the Ibusuki Marathon. 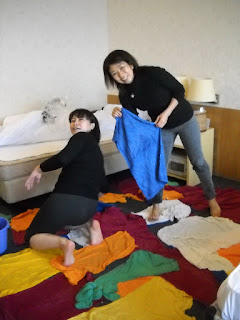 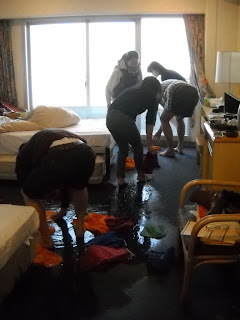 Hihi.
Of course we were happy we could sleep in Esther the Car as marathon friends Noriko and Sayuri decided to flood the hotel rooms....
Yes, rooms! 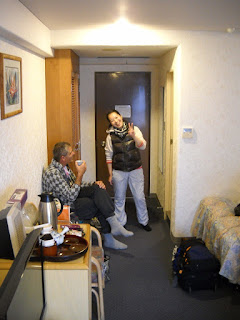 After a big slushslush clean/dry-up action by all our team members, it was time for a cuppa and a joke.
But what not a joke was.... our friend Mi-chan would join us for the marathon. Last year she was on the side line, together with Marijke, cheering and shouting us to the finish line.
This year she decided to try the 42K herself. 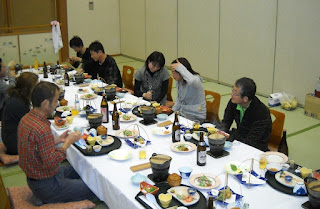 And.... we all made it to the finish line,
AND to the big feed-up cq drinkdrink party afterwards. 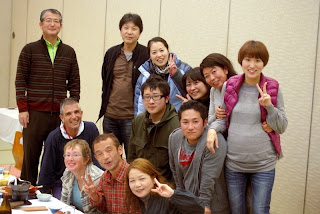 Thank you all for getting tired;-) 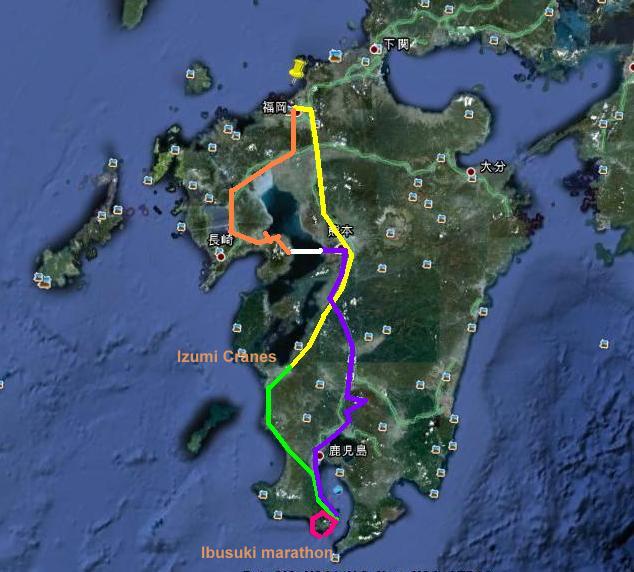 Esther the Car drove us safe and comfy >> 850 K.
Guess what Nori and Wakame said
when we picked them up from their " cat jail"......
Salute
at 10:02 PM No comments:
Email ThisBlogThis!Share to TwitterShare to FacebookShare to Pinterest
Labels: jan 2012

Marijke made a nice picture collage of this year Tamaseseri.
Click on the link:
http://wingsndthings.blogspot.com/2012/01/tamaseseri.html
at 2:41 PM No comments:
Email ThisBlogThis!Share to TwitterShare to FacebookShare to Pinterest
Labels: jan 2010 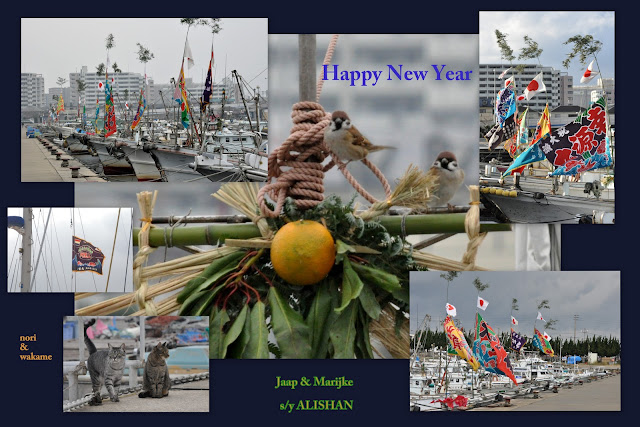