Well, we were sailing somewhere between Bora Bora and Fiji.
That was on sy JAN HARING.
When we left Bora Bora our goal was the Cook Islands, but 1 day out...we ran into horrible weather.
Oh yes, those were the days with poor weather info....
Big seas, strongstrong winds and worse of all, 100% overcast for 3~4 days.
No Way we could take any sun sights, needed for our position.
Oh yes those were the days with out GPS or Satnav.
So for safety reasons ( there are zillions of dangerous reefs at the Cook Islands) we headed for Pango Pango, US Samoa. The trips lasted 6 days (orso) and we were perfectly white-washed after those days.... 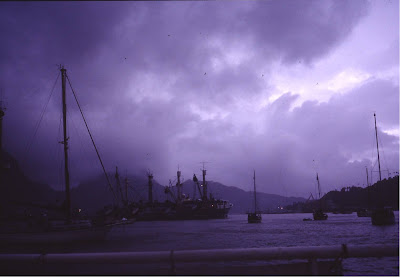 The first few days at Pango Pango were still lousy, see pix, but at the end the sun came out.
And who did we meet there? 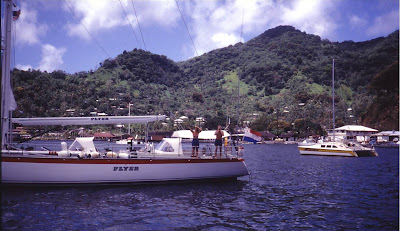 sy FLYER with Connie v Rietschoten. well-know yachtsman at that time.
Wow, our Jan Haring fitted twice INSIDE that boat....


While at Pango Pango, of course there were more cruising buddies....With HAM radios on board (we had none).
And so, we were able to make radio contact with sister Marleen and
b-i-l Loek who were cruising on their sy Blankenheim somewhere in Fiji.
Remember, this was all pre-internet and pre-mobile phones.
So we made a time schedule to meet-up with them a few weeks later in Suva, Fiji.


But in between there was Tonga...a place not to miss. 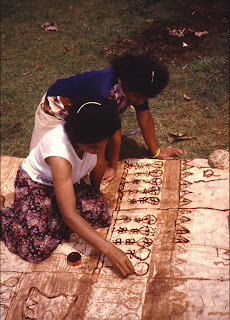 Tonga was super for great sailing, snorkeling, the weather, meeting the locals for dance and food parties and even played a game of rugby!
BTW, why is that ball so funny shaped? 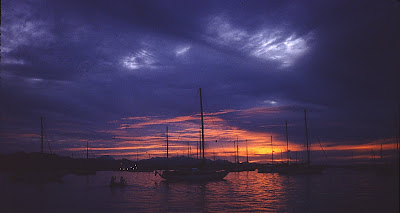 Finally in Suva, Fiji we met up with Marleen and Loek. They had sailed on sy Blankenheim from NZ to Fiji.
Tell you we had heaps and heaps to talk as it was basically 12 years that we hadn't seen each other.
This pix above is at the RSYC, nice sunset, good reason for an other Fiji Bitter. 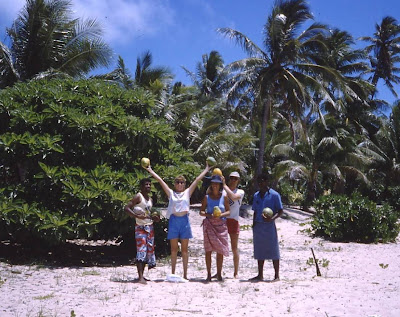 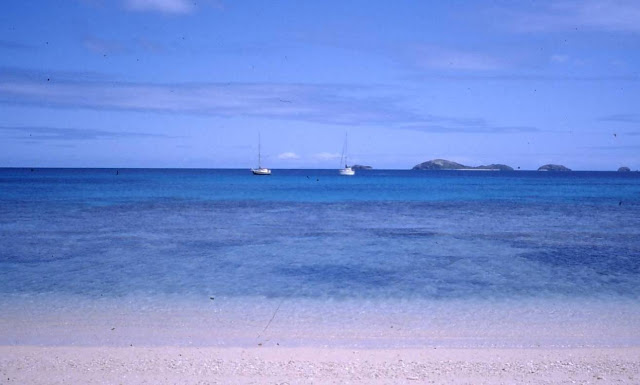 Together we cruised Mbenga and Kandavu and as you can see
It was also pre-digi camera's.
And pre-overcrowded anchorages;-)
Would luff to hear what you were doing those days...
About Jan Haring, see also:
http://www.syalishan.com/flashback.htm

at 12:30 AM No comments:
Email ThisBlogThis!Share to TwitterShare to FacebookShare to Pinterest
Labels: aug 2011 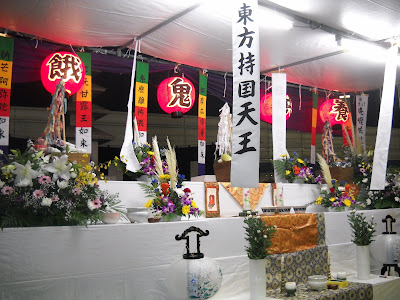 Last week it was Bon Odori,  an event that's part of the Obon Festival.
The car park area of our harbor was turned into a "dance parlor" with of course a "mobile shrine"
(picture above).
The "dances" are a couple of Line Dances of which only 1 is "understandable" for us.
Any way we had a good time and the weather was perfect.
Sorry no pix from the dances as we were busy ..
......dancing;-) 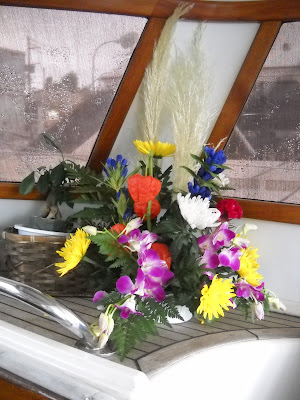 Guess when and where we got these flowers from???
Note the rain...it has been pouring now on-and-off for 1 week.
About Obon and Bon Odori:  ( from wikipedia, thanx)
There are several traditional dances in Japan, but the one of the most famous and common dance is Bon dance, which is called "Bon Odori" in Japanese. People dance Bon Dance in the Bon Festival. The Bon Festival is held every summer, in every district in every city.
Bon means welcoming ancestors' souls and holding a memorial service for the souls. There is a Bon week in August every year, and Bon continues for about a week. During Bon, sometimes all relatives of family gather and hold a memorial service for their ancestors, and enjoy being in a reminiscent mood. This traditional comes from Buddhism in China.
The Bon Festival is held during in Bon week, and people gathers at the near open-space or the parks, and dance with traditional Japanese music. The music should be happy music to welcome the ancestor's souls, and people have a duty to make a happy, mysterious, and welcoming mood. Moreover, the Bon Dance should be held in the night because Japanese people believe that ancestors' souls come back in the night.
The technology in Japan has developed in a hundred years, but Japanese people have never forgotten the traditional heart, and taking place Bon Festival and Bon Dance every summer. Japanese people will continue to venerate this traditional, and to respect the soul of their ancestors
at 4:48 AM No comments:
Email ThisBlogThis!Share to TwitterShare to FacebookShare to Pinterest
Labels: aug 2011 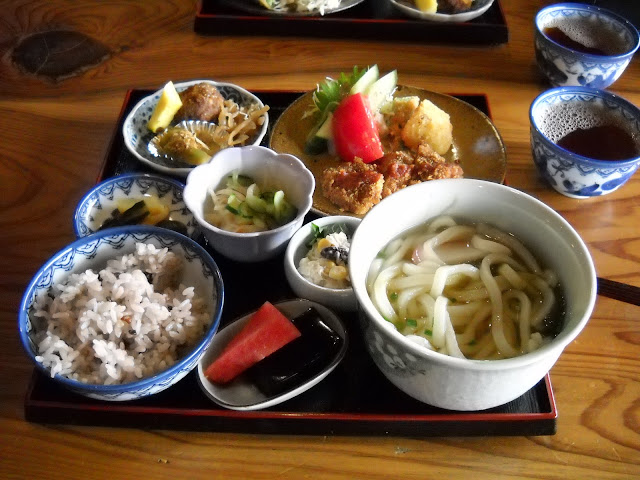 So many times we hear: Ohno, Japan is so expensive! And yes indeed you can spend heaps of yen on food, like good sushi: 500 yen for 1 bite!
But see here a lunch-set we had the other day. A real good feed for under 800 yen. Not only good value, but also good taste and for sure no-junk food.

Itadakimasu
at 8:22 PM No comments:
Email ThisBlogThis!Share to TwitterShare to FacebookShare to Pinterest
Labels: aug 2011 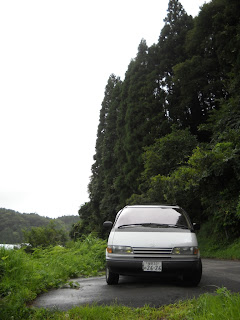 An other great spin with Esther the Car.
This time we drove to Mt Aso area for birdies ( Marijke is editing her Bird Blog...On Air Soon).
And Mt Kuju area for climbing and flowers.
We left Fukuoka at midday Saturday...as the fish market this weekend was held on Saturday i.s.o. Sunday due to Obon Holiday. Tell you, we're confused with the days!

About the climb: Starting point was at Makinoto Pass.
That's where we spent the night at a romantic car park;-)
It was cool at night, we even needed a sheet!
The Goal: Nakadake. 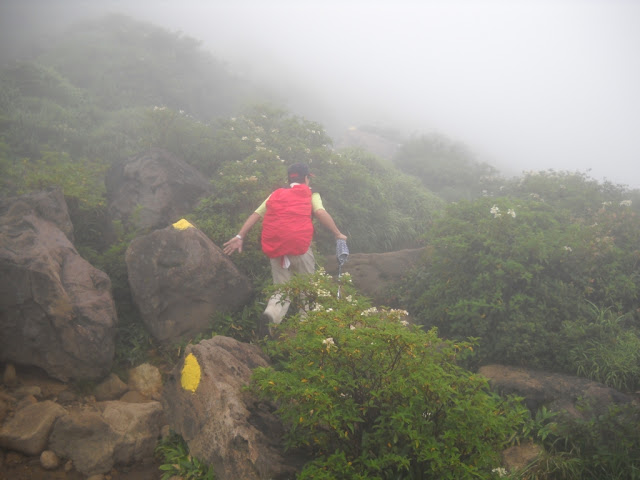 It turned out to be an All Cloud Cover Climb. A fellow climber showing the trail.
But soon we would go our own pace. 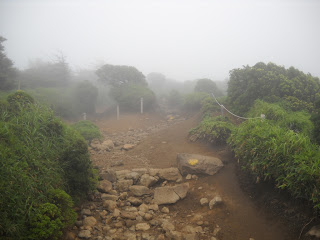 From here on all by myself.  It's 0630 and not many climbers are on the mountain, yet.
On the way to the top, I met only 4 others going up and about 5 coming down (spent the night on the top?)
On the way down...oops, it can be crowded, even in these poor conditions. 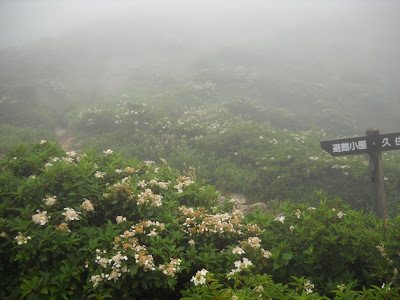 Useful trail markers, esp. needed at cross-roads. As a man-of-the sea, ahum,  the ( steady and strong) wind gave me an idea about N~S~E~W.  Going Up was so-so-hard work, going down was easy...until it started pouring and the trail became slippery... 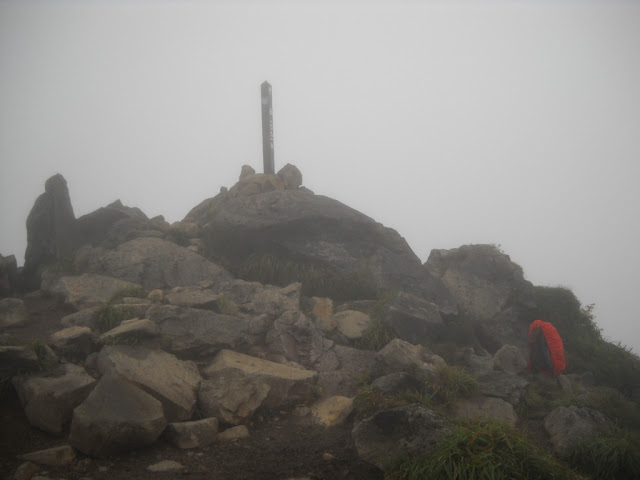 The TOP, and the only thing to see is this marker.
But it is the Highest Point on Kyushu! 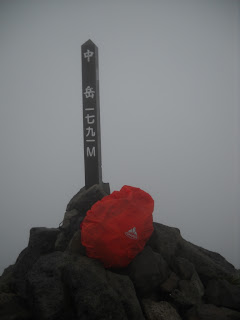 For those of you who cannot read or write:
Naka Dake, 1791 Meter above sea level....
(Ask Alishan) 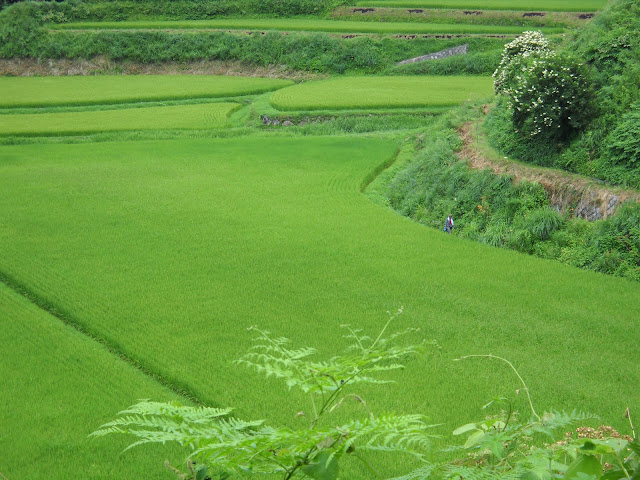 Meanwhile down below: Can you spot Marijke?
And if so...What do you think she is doing? 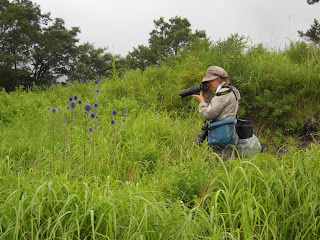 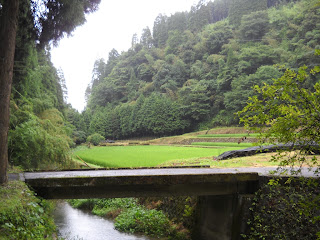 Country road.....
We took the "inshore" roads to avoid the traffic jams and wow, did we explore some nice places.
That's what it's all about.. 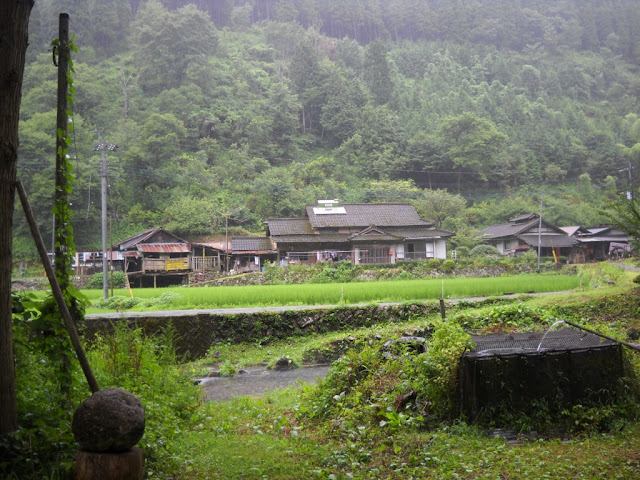 A farm house, somewhere in the whopwhops.
Indeed it was an other great trip in-land.

Salute
at 3:20 PM No comments:
Email ThisBlogThis!Share to TwitterShare to FacebookShare to Pinterest
Labels: aug 2011 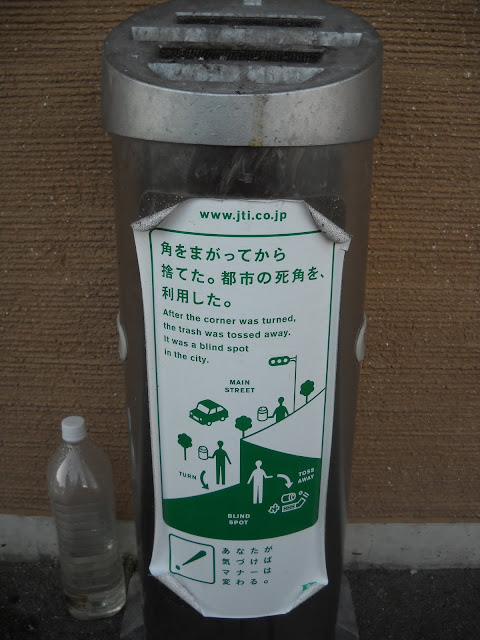 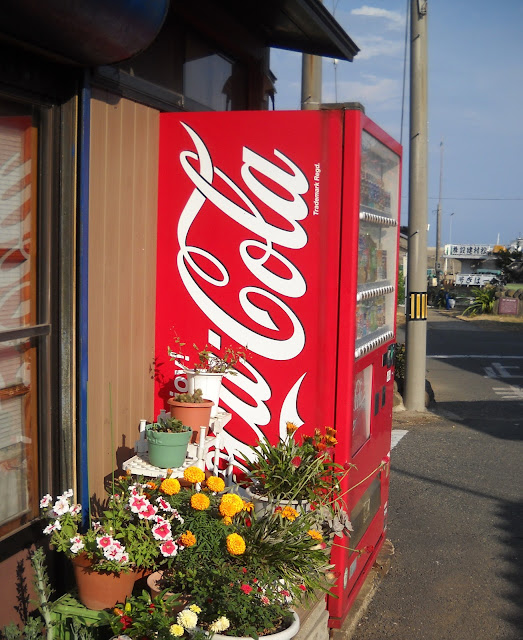 I think this CC commercial is so much nicer....
Agree?

Salute
at 4:39 AM No comments:
Email ThisBlogThis!Share to TwitterShare to FacebookShare to Pinterest
Labels: aug 2011

Oh yes, we can hear you saying:  Again Weather Talk? 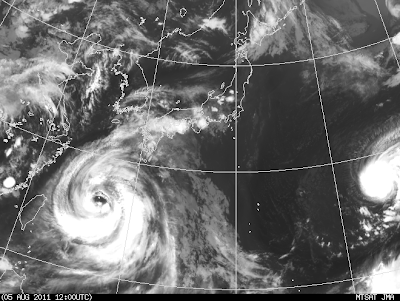 Don't know what it is this year...So many typhoons and "knock-knock" so far we haven't been  on the direct path of these T-bags. Take these two: Both will start curving NorthWest  from this moment on and so they will leave Fukuoka in the middle. Just make it here hot-and-even-hotter. ( 35~36C in the cabin...)
The plan was to start sailing on Fu Kyo the Cat to Okinawa this week...but seas will be too big + wind on the nose,  so instead the bows will head North ( from Aug 7 ~). Hmmm, will it be cooler over there?
Keep you informed.